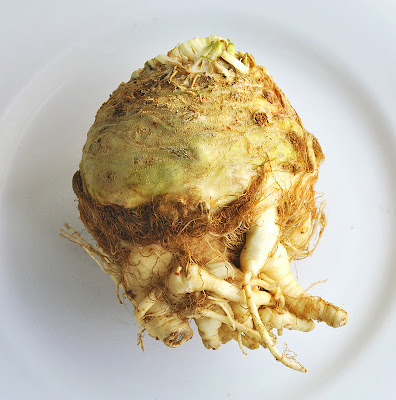 I've never met anyone who didn't know green celery on sight, but I've come across many who needed help identifying this weird, gnarly root--and even after a concise explanation (it's basically the root of the celery plant), their faces often exhibit a look of confusion (is it, like, edible?).

The difference between celeriac and the more familiar green celery stalk is at once minor--they both taste like celery--and stark. Whereas the top is green, juicy, crisp and stringy, with a fresh, almost herbal taste, the root, once peeled, is dense, with a creamy white color and a richer, more earthy taste.

Celeriac may be a much better name for this plant, because although it is technically a celery root, it's a specific cultivar, grown for its root vegetable qualities, as opposed to the leafy stalks. The tops don't grow in a tight bunch, the way "regular" celery does, but rather in thin, separate stalks. I love both forms, as each brings a unique character to any dish, whether cooked or raw, but celeriac is truly special.

If you're shopping for one of these, there are two main attributes to look for. The first is size; smaller ones, with more knob and less hairy, twisted root, will generally yield the best inner flesh, suitable for both cooking and serving raw. The other is weight; sometimes celery roots become porous, especially as they grow larger, so pick one that feels heavy for its size, indicating a more solid flesh. Of course, if you're planning to make celeriac puree, or a cream-style soup, this won't really be much of an issue, since you will be blending it to smithereens anyway, and the flavor will be the exactly same.

I included celery root in a soup I made a few days ago, just before a predicted snowfall that never happened. It was still chilly out, so a hot soup was much appreciated. This one began as yet another way to consume curried yams--I still have nearly half a case left--along with a few parsnips and some still-fresh ears of corn. I would have used the regular green celery, but I did have this one smallish celeriac that I knew would dice up uniformly and meld nicely with the other ingredients. So here's how it went: 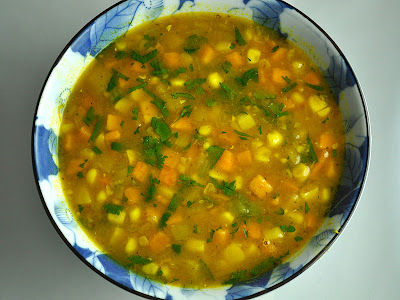 I heated a couple tablespoons of coconut oil in a large pot and added 2 large onions, diced. As soon as they had softened and become very fragrant, I added parsnips, celeriac, and yams, also diced, and continued stirring until they had begun to color just a bit around the edges.
I added some minced garlic, stirred a minute longer, and then poured in a couple liters of boiling water and 3 vegetable bouillon cubes. When it came to a boil, I cut the kernels off a few ears of corn, directly into the pot, and then scraped the starch off the cobs with the back of the knife and added it, along with salt and a generous spoonful of Maharajah Style Curry Powder, stirring thoroughly. Then I adjusted the heat to maintain a vivacious simmer, and let it cook until all the vegetables were tender. Just before serving, I stirred in a handful of coarsely chopped cilantro. The curry powder I used contains whole saffron stamens, which add tiny red flecks of visual interest and a sublime aroma back-note.

Now, having green celery in this soup would have provided its characteristic qualities, but they would have washed into the background--as I would have wanted. But the celeriac retained its flavor, even after bleeding some of it into the soup base, and even surrounded by the heady spices in the curry mixture. It could be savored clearly, just as much as the yams, parsnips and corn--and that's what I call character!

That's how celeriac distinguishes itself in a cooked dish. For a raw example, here's a salad from Speed Vegan: 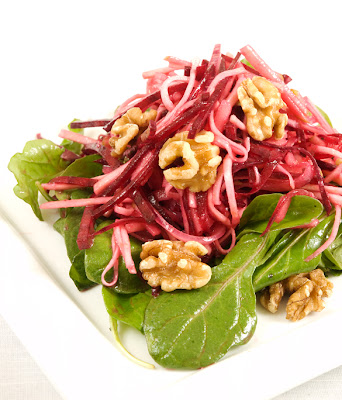 This visually stunning salad is a meal that will fill you up but won’t weigh you down. If you have trouble locating both arugula and watercress, simply use a double quantity of whichever one you find. I like to cut the vegetables into very fine julienne (thin as matchsticks), but if this seems too taxing, just grate them. If you can’t find celery root, substitute with celery stalks, peeled and cut the same way.
Remove any coarse stems from the arugula and wash in plenty of water along with the watercress leaves. Allow the greens to soak and crisp while you prepare the rest of the salad.
Peel the beet, celery root, and apple. Cut them into fine julienne or coarsely grate them. Cut the onion in half lengthwise, and then thinly slice it crosswise.
Combine the lemon juice, Roasted Garlic Purée, mustard, agave nectar, salt, and pepper in a large bowl. Whisk until well blended. Whisk in the olive and flax oils and continue whisking until emulsified. Add the julienned vegetables and toss until well coated. Let sit for about 5 minutes.
Drain the arugula and watercress. Dry it in a salad spinner or roll it gently in a towel to absorb the excess water. Add to the vegetables and toss well. Divide among 4 to 6 plates. Sprinkle the walnuts on top. Serve at once.


Posted by Alan Roettinger at 5:12 PM

IF IT'S WORTH DOING,
DO IT WITH PASSION.

Ascent has been a lifelong desire of mine: to go higher, to reach the top. I've never been driven, as some have, to climb mountains—although I have climbed a few—but I do have an irresistible urge to rise above. I can't handle the status quo. I have to be on an upward trend, to be more free, more content, more delighted.

As a cook and an eater, I want my food to reflect my aspirations. It's not enough that my food fill stomachs; it must gratify all the senses and nourish the body in the best possible way. I’m part of an ongoing process that follows the natural evolution of refinement and greater awareness. As I discover new ingredients or methods, or learn more about the impact of food on health, I incorporate my discoveries into the way I cook and what I eat.

This blog is about one segment of the quest: nourishment choices, beginning with a shift away from an unacknowledged assumption that I am, and have a right to be, an eater of creatures.

I’m an omnivore by nature—meaning that I can eat anything I choose. This is a fantastic gift, which a lion, for example, does not enjoy. The king of the jungle has no choice; he must eat other animals, period. I, on the other hand, get to decide which of all edible foods I will eat. I can take this freedom for granted; I can ignore the source, ingredients, or quality of foods I eat. Or I can take my choices seriously, studying them, refining them as I go, and actually benefit from the choices I make.

This—the making of specific choices—much more than the mere fact that I have the gift of choice, is what allows me to become a fully actualized human being.